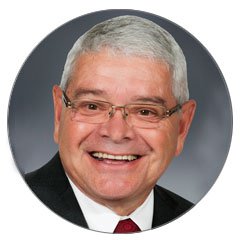 Mr. Eagan has enjoyed a diverse career spanning both the military and private sectors at the senior executive level.  After earning an undergraduate degree in business administration from the University of Prince Edward Island, Robert worked for two years as the head accountant at the Charlotte County Hospital in St. Stephen, NB.  He then joined the Royal Canadian Air Force as a finance officer.

During his 27-year career in the Canadian Forces, Robert served in several senior positions, including Base Comptroller of Canadian Forces Base Lahr, Germany, and senior finance officer for the Air Force.

After retiring from the Canadian Forces in 1996, Mr. Eagan joined Commissionaires Ottawa where he retired as Chief Financial Officer in 2016.  He also served on the Commissionaires Ottawa board and was a key contributor to the growth and development of the not-for-profit company, both strategically and operationally.

Robert has maintained a life-long interest in the health care environment since his early days working at the Charlotte County Hospital.  He studied health care administration at the University of Ottawa and received a Masters in Health Administration in March 1996.