As his 100th birthday draws near, John Denzil Sparks relaxes in his room and thinks back over his remarkable life. Although he spent more time working on dairy farms than he did tending to wounded soldiers, he knows that he was forever marked by his five years in uniform.

“My wartime service affected me, there’s no doubt,” he says. “I’ve become more aware of it as I’ve gotten older.”

“Mom told me that dad was never the same after the war,” recalls daughter Bonnie Moodie.

On June 7, 1944 – DDay +1 – he waded ashore in France as part of the 23rd Field Ambulance, Royal Canadian Army Medical Corps. “We were supposed to land late in the afternoon of the invasion,” he recalls, “but the tide had gone out, so we had to wait until morning.”

As Allied troops fought their way through France, Belgium, Holland and into Germany, Denzil Sparks cared for the wounded just behind the front lines, narrowly escaping death on several occasions. “No matter what we were doing or where we were, we constantly had the feeling that the worst was yet to come.”

On one occasion, attacking Nazi warplanes forced he and his comrades into their foxholes for cover. When one of his fellow orderlies saw that an officer had taken his foxhole, the orderly took cover under a jeep. It wasn’t enough protection, though: a piece of shrapnel took his life.

The advancing Allies also faced the continual threat of long-range artillery; the Nazis turned their coastal guns – designed to fire at ships – toward targets on land. The stress caused Denzil Sparks to suffer a short-term breakdown. “I began to shake uncontrollably all over,” he recalls. “My medical officer put me on light duty for a couple of days until it passed.” 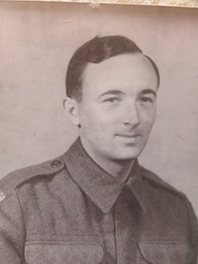 Denzil Sparks recovered and went on to serve overseas until the spring of 1946. Back in Canada, he took a job as a nursing orderly at a Veterans’ hospital in Ottawa. The work didn’t agree with him. “One time, a Veteran experienced a psychotic episode and was threatening people with scissors,” he recalls. “I had to disarm him.”

The stress of dealing with injured veterans triggered another nervous breakdown. Faced with prospect of dealing regularly with patients suffering from similar issues – male nurses tended to be assigned to psychiatric hospitals during that era – Denzil Sparks decided to return to his roots.

He had grown up on a dairy farm along the Rideau River, near Osgoode Station (today Osgoode), a village just south of Ottawa. Denzil is a direct descendant of Nicholas Sparks, one of the original landowners and founders of Bytown (renamed Ottawa in 1855). As a teenager, Denzil met a shy young woman by the name of Edna Smith; they began to date and attended events together at the Lighthouse dance pavilion. After high school, Denzil started work at an electrical shop – something he had studied his last year of school – while Edna worked as a secretary for the Government of Canada.

When they decided to marry in 1948, Edna was forced to leave her job, in line with the policy of the time. They bought a dairy farm about 20 minutes from the Sparks homestead and settled down to raise a family. They were blessed with three healthy, athletic children – a son and two daughters. He and Edna travelled, went to dances, played euchre with friends and enjoyed fiddle music. Denzil loved to fish, snowmobile and to tinker – he was a handyman who loved repair projects. He joined the Royal Canadian Legion and the Osgoode Odd Fellows.

When their grown son Brian showed no interest in taking over the family farm, Denzil and Edna decided to sell it in 1972 and found jobs in the city. Denzil worked at a metal shop and later at Agriculture Canada’s Central Experimental Farm; Edna returned to secretarial work with the federal government. Their children grew up and married. Two grandchildren followed.

In 1982, Edna was diagnosed with cancer and died six years later, two days before her 66th birthday. Denzil remarried 18 months later; he and second wife Lucy loved to travel and to play cards. She passed away in 2000 and Denzil moved to an apartment in the city.

In 2018, when his health began to fail, Denzil moved in to Perley Health. One day, he ran into Bud Hannam, a fellow resident who had also served in the 23rd Field Ambulance. “We trained together, but never worked alongside one another because Bud served in the office and I served in dressing stations.”

The two occasionally reminisce about the war years, although their stories focus on playful hijinks and pranks rather than on the daily grind of battles and casualties.

One story involves a trip to London Denzil took in March of 1945 to visit his brother George, who had enlisted and was posted there. Walking along the street in his dress uniform, Denzil was confronted by two Military Police who challenged the fact that he was wearing a tie. “I told them: ‘I’m entitled to wear a tie,’” Denzil says. “’I said: In a couple of days, I’ll be heading back across the Rhine. If you’d rather take my place, you’re welcome to it.’ That shut them up.”

“It’s nice to live among others like me and there’s something for us to do here everyday,” he says simply.