For Becky and Arthur White, the 2016 move into  Perley Health was just the latest step in the life journey they have shared for more than 70 years. They met in their early 20s, married while on leave from their units during the Second World War, and went on to raise three sons. Along with longevity, what makes their story so compelling is a constant dedication to service—to their country, to their family, to their faith and to each other.

Born Mary Rebecca Brimacombe in Aug 1923, Becky grew up on the family’s 800-acre farm in Sundridge, Ontario. She milked cows, drove horses and helped with whatever chore needed doing. She remembers her father building a few cottages where the farm sloped down into Lake Bernard. The region had already begun to attract Torontonians keen for weekend escapes.

Her final year of high school, Becky’s life took a new turn. No local school offered Grade 13, so Becky did her last year of high school in St. Mary’s (near London) and lived with an aunt, as her older sister had done. “Being away from home opened my eyes a bit,” she remembers. “And I saw that my future likely wasn’t going to be in Sundridge.”

Little did Becky recognize that her future—and the future of millions around the globe would soon be disrupted by events brewing in Europe. After declaring war on Germany in 1939, Canada transformed the National Research Council (NRC) in Ottawa into a hive of research and development activity in support of the war effort.

There were plenty of jobs, but a shortage of accommodation and a respectable woman could simply not live on her own during that era. Becky’s uncle knew a family in Ottawa with an extra room, though, and she landed a job with the NRC in 1942.

Arthur Patrick White was also born in 1923—in New Liskeard, a few hours north of Sundridge. Arthur’s father was equal parts handyman and eccentric; a talented mechanic, he made his living fixing things that others couldn’t. He also built his own airplane from a kit—in the dining room of the family home. Arthur’s father and uncle flew a Gypsy Moth into the bush to search for gold. Arthur companied him on many camping adventures, learning to hunt, fish and survive in the bush.

“At first, dad didn’t know how to fly,” recalls Arthur. “He couldn’t land well and broke many propellers trying. So I learned how to make new ones by laminating and shaping kiln-dried wood. Uncle Percy—my dad’s brother was also a pilot and taught my dad how to pull back on the stick and land properly.”

Arthur finished high school and got a job at a factory in Galt, Ontario that machined customized parts. He became a highly skilled and experienced machinist—skills that earned him a job at the NRC in 1941. He worked in labs on a number of technologies directly related to the war, including range finding using optical equipment.

Arthur boarded with a family that one day hosted a dinner for another family with a boarder of their own—a young woman who also worked at NRC. “I was smitten right away,” Arthur recalls. “She was so pretty.” “I was impressed that he had a car and a sailboat,” says Becky. “I later learned that he shared them with a friend of his, but that didn’t matter to me.”

As their love grew, so too did their sense of duty. Things were not going well for the Allies, and Becky and Arthur yearned to make a larger contribution to the war effort. Arthur wanted to enlist for active service, but the NRC, in need of bright young men like Arthur, convinced the Army to delay his basic training until he had finished a particular project.

On his way to Europe, Arthur encountered another snag:the doctor who gave him a final check-up in Halifax determined that he was underweight and must remain in Canada. “I could do all of the physical stuff—climb walls and run for miles with a full load on my back—but I weighed only 108 pounds,” says Arthur. The Army sent him for training in radio and radar technology, and assigned him to install and maintain radio facilities along the Pacific Coast. 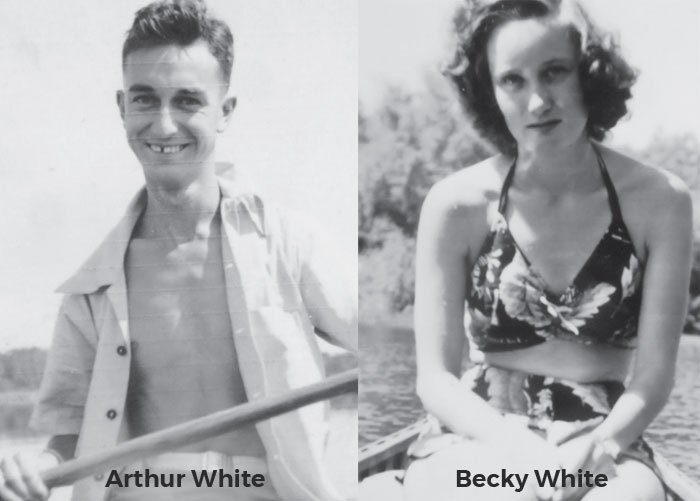 In the meantime, Becky had also enlisted. “A girlfriend of mine and I decided that our lives were dull and we should join the Navy,” Becky recalls. They enlisted in the Women’s Royal Canadian Naval Service (Wrens), completed basic in training in Galt, Ontario and radio training in Saint Hyacinthe, Quebec.

In 1943, Becky was assigned to monitor the telegraph transmissions of Nazi submarines from a new facility in a farm field outside Ottawa: Number 1 Station HCMS Bytown. She also became one of the few who trained to operate the direction-finding equipment used to locate enemy vessels. “We knew exactly what we were doing,” says Becky. “We had to help stop U-boats from destroying ships and killing our men. I don’t think what we did was anything to brag about; it was my job, I accepted it and did it.”

In 2016, the British High Commission awarded her the Bletchley Park Commemorative Badge. Arthur also proved to be remarkably adept at his craft—he inherited his father’s ability to troubleshoot problems effectively. “One time, a barge loaded with radio gear capsized off the coast,” Arthur says.

“Salt water had seeped into the gear and nearly wrecked it. Headquarters gave us two months to get it up and running, but we managed to do it in two weeks.”

As a Grade A Telecom Mechanic, Arthur worked with cutting-edge, top-secret radar technologies, including the cavity magnetron and klystron. Becky and Arthur wrote each other often and managed a brief telephone conversation on New Year’s Eve. They  arranged a short leave together in Sundridge, where they married in 1944.

Soon after they returned to their posts, the tide in the war turned. When the war ended, Arthur chose to stay in service for another year. Following her discharge from the Navy, Becky joined him in Prince Rupert, where their first son was born in 1946. Arthur’s skills were a perfect match for Canada’s rapidly evolving aviation industry. The family moved to Roxboro, a new suburb of Montreal, where they built their own house and had two more sons.

The pond adjacent to their property provided an ideal playground-games of shinny in winter and frog-hunting adventures the rest of the year. Arthur spent most of his career with Aviation Electric, where he repaired and overhauled avionics equipment. His sense of adventure remained strong: he got his pilot’s licence and bought a two-seater plane—a 1946 Aeronca Champ. 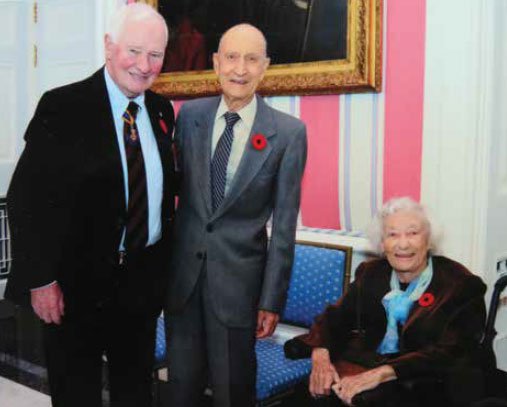 Becky and Arthur White with His Excellency the Right Honourable David Johnston,
Governor General and Commander-in-Chief of Canada

Arthur also built a houseboat for family vacations on the water. Becky was a homemaker and occasionally stayed in touch with a few fellow Wrens. The family went to church, skied in the Laurentians and visited Sundridge nearly every summer. Arthur and Becky emphasized the importance of education and all three boys became engineers.

As the boys grew into men, Arthur and Becky became increasingly active in the Shantymen’s Christians Association, today known as SCA International. The two travelled extensively for Christian fellowship and to help fellow members overcome their woes. Arthur often checked the wiring in their houses, rewiring those that were potential fire hazards. Becky counselled many young couples.

When Arthur retired in his mid-50s, the two built a house in Sundridge, not far from where Becky grew up. The years flew by; now, there are five grandchildren and three great grandchildren—“All of the fun and none of the work,” jokes Becky. They often travelled south to Texas or Florida in winter; they were well into their 80s before the drive became a bit too much for them.

About 10 years ago, they began to spend more and more time in a rented apartment in a seniors’ building in Ottawa. Becky first came to the Perley to convalesce from surgery; in 2016, she moved in full-time and Arthur followed soon afterwards. Although they have separate rooms for the first time in 70 years, they have meals together every day. “We really enjoy it here,” says Arthur. “All of our needs are taken care of and we still have each other.”