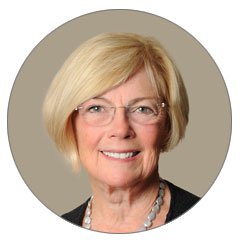 Margaret has been a member of the Board of Directors at the Perley Rideau since 2011. Margaret is a Registered Nurse who has held numerous senior health care positions while receiving multiple awards and special accreditations over an outstanding career. Although she worked in Nepal and Montreal early in her career, Margaret has had a long-term relationship with Ottawa especially with the Royal Ottawa Health Care Group where she held a variety of posts since 1989. Her most recent position was Vice-President Professional Practice and Chief Nurse Executive at the Royal Ottawa Health Care Group from 2005 to 2012.

She is very active, including board memberships and advisory groups. She has been active in the research domain and has published many important papers and publications.  Her special interest has been psychiatry and mental health. In 2012, she was awarded the University of Ottawa School of Nursing Recognition Award.